7 Cute Frog Breeds That Will Make You Say Aw

Who doesn't love a cute animal? But have you ever thought of frogs as cute? Some people only see a slimy, gross amphibian, but the truth is that frogs really can be quite adorable.

Here are the top seven cute frogs and a few cool facts about each. 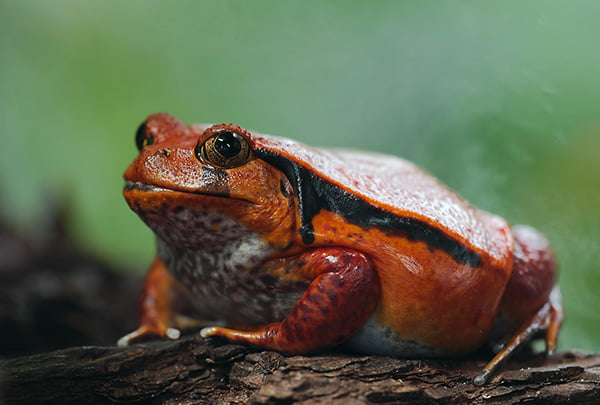 One of the cutest frog breeds is a frog called the Tomato Frog. These round frogs range in color from yellow-orange to red, thus earning them their descriptive name. In addition to their bright backs, tomato frogs have off-white bellies, and some will have dark spots along their sides. These cute frogs secrete a toxic substance from their skin when threatened and inflate their bodies to appear larger to ward off predators.

Tomato frogs are native to Madagascar, living in rainforests and swamp forests, near slow-moving waterways or stagnant water. They burrow under leaves and mud during the day and go out hunting insects at night. These frogs get to be between 2.5 and 3.5 inches long and have become popular pet frogs due to being relatively easy to care for and good pets. 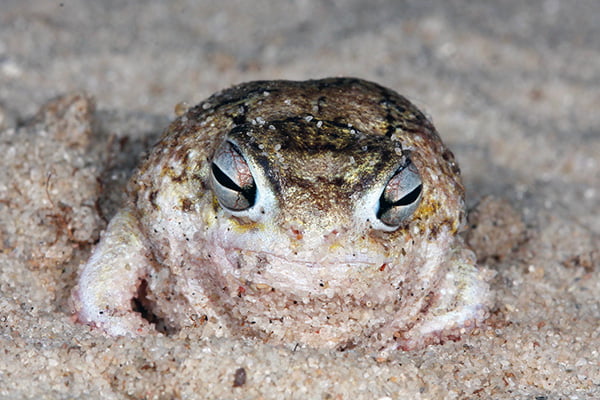 A frog breed with an adorably expressive face and pudgy body is the Desert Rain Frog. This frog breed can be found in South Africa and Namibia, living in the sand between the sea and the sand dunes. These frogs burrow to get the moisture they need from damp sand. The sands they live in are subject to many days of fog a year, which is how an otherwise arid habitat radiates moisture.

These funny little guys have bulging eyes, small mouths, round bodies, and short legs. They cannot hop, so they burrow to avoid predators. These yellow or light brown have semi-transparent bodies and are 2-2.5" long. They eat insects and have a very squeaky scream they use to warn off predators.

One other very interesting fact about Desert Rain Frogs is that they don't go through a tadpole stage. These frogs hatch from their eggs as fully formed adults that are ready to move about on their own. 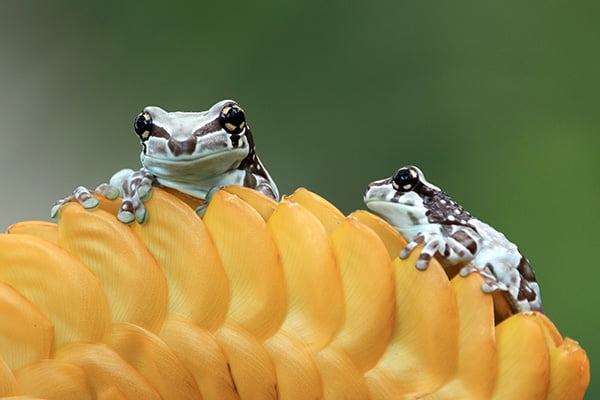 The Amazon Milk Frog is loved for their big, innocent golden eyes. These frogs are native to South America in countries like Guyana, Colombia, Brazil, and Peru. They got their name not from the appearance of their skin but rather from the sticky white secretion they emit when they are threatened.

These frogs are an arboreal species, meaning they live most of their lives in the treetops. They have sticky padded toes to help them do this and can carry up to 14x their own weight. They have a light grey body with sticking banding and shed their skin once a week. They get to be 2.5-4" long and can live up to eight years in the wild. 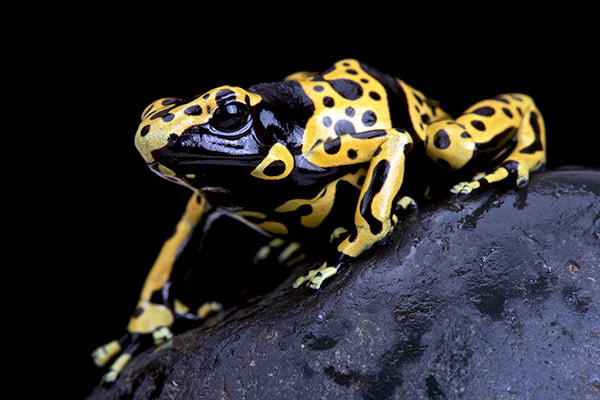 The Bumble Poison Dart Frog, or Yellow Banded Poison Dart Frog, is a pretty little South American frog found in the neotropical forests of north Brazil, southeast Colombia, and Guyana. These colorful yellow-banded frogs live about 5-7 years in the wild but can reach ages 10-15 years in captivity.

Another very interesting fact about Bumblebee Poison Dart frogs is that they are not toxic in captivity. These frogs get their poison from the insects they eat in their natal habitat, so frogs raised and fed in human care do not eat the insects that make them toxic.

Another cute fact about these frogs is that the male will guard the eggs until they hatch, at which point he will carefully transport every tadpole up into the forest trees to pockets of water that collect in certain cupped leaves. Fathers also know only to put one tadpole in each leaf since if there are two, one is likely to eat the other while they mature. He can communicate with the tadpoles via water vibrations, so ensure that each tadpole gets a water-filled leaf all to themselves. 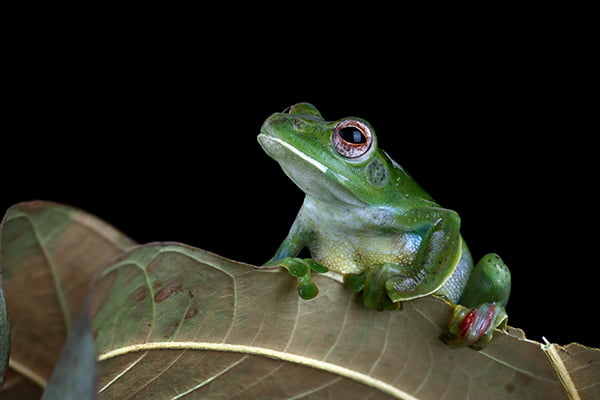 The Glass Frog is a cute pixie-like frog native to southern Mexico and Central America living in high mountain rainforests. These frogs are a delicate lime green color with big golden eyes. However, the feature that earned them their name is their translucent tummies. In glass frog breeds, you can see the frog's internal organs right through its belly.

These little frogs grow to 1.2-3" and can live up to 14 years. These arboreal frogs live most of their lives in the treetops, only coming down to mate in the rainy season. Male frogs will guard new eggs that are laid on a leaf until the eggs hatch and the tadpoles slide safely into a pool of water below. These frogs eat insects and sometimes even other smaller frogs. One of the most impressive features of this cute frog is its jump. Glass frogs can jump up to lengths of 10ft! 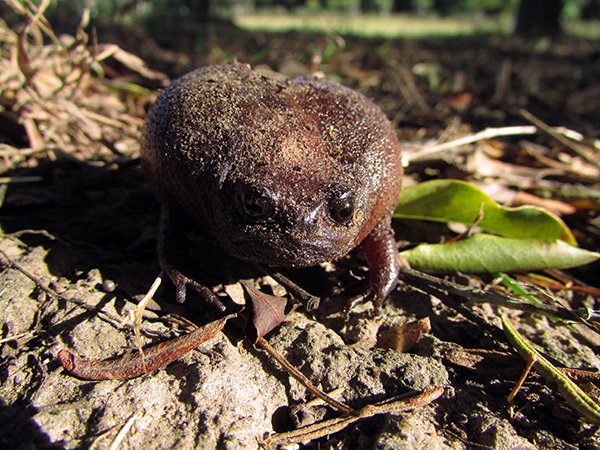 The Black Rain Frog is probably the cutest of the cute frogs, mostly because of its adorable little grumpy expressions. These grouchy little frogs are native to the southern coast of Africa at altitudes of 3,300 ft. They are burrowing frogs and can dig tunnels up to six inches deep. They have dark backs that are covered in small granules, which have been described as looking a bit like an avocado.

They can live up to 15 years in captivity but only live to four years or so in the wild. To protect themselves from a predator, these chubby little cuties can let out a fearsome screech and can puff themselves up, either to look bigger and more threatening or to prevent creatures from pulling them out of their tunnels.

These frogs can’t swim, but they will inflate themselves and float in water to get where they are going. With short stubby legs and a big round body, these frogs walk rather than jump and burrow to hide during the day. 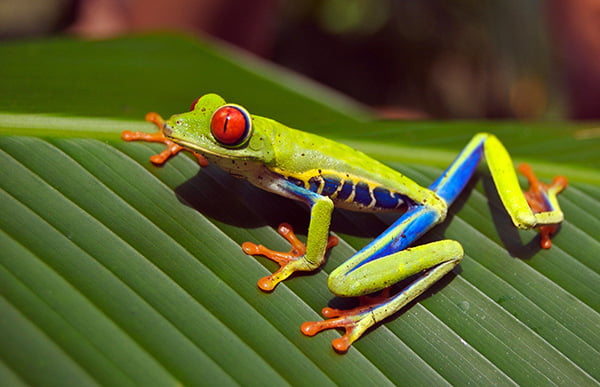 The search may be over for a cute frog. Red-eyed tree frogs are super cute and attractive frogs with their cup-like footpads, bulging red eyes, and conspicuous coloration. These cute little frogs can be found in tropical lowlands in southern Mexico, throughout Central America, and northern South America.

Red-eyed tree frogs aren't demanding pets and can live happy lives as long as a desirable environment is provided. These little 1.6 to 2.9-inch-long frogs can live up to 5 years in the wild and survive much longer in captivity ranging between eight to twelve years.

This breed of frog changes the color of its eyes based on its mood. They can feature hints of yellow, blue, dark green, or reddish brown color.

Everything You Need To Know About Pomsky (Pomeranian Husky Mix)

Everything You Need To Know About Whoodle Breed

Can Dogs Eat Pears? All You Need To Know