A koi betta is a betta fish that has all the beauty of the marbled pattern of a koi fish with the small, elegant size of a betta—making these freshwater fish very popular among Betta fish enthusiasts.

For fish lovers who are looking to add a new exotic-looking betta to their collection, the koi betta may be a perfect choice. These stunning fish require a little extra preparation when it comes to planning to bring one home since they can be aggressive and territorial. Once safely homed, either alone or with other appropriate tank mates, these fish make a gorgeous addition to any aquarium.

In this care guide below, we will provide you with everything you need to know about caring for a koi betta fish. From what koi betta eat to tank requirements, this post will explain it all.

Name And Origin of the Koi Betta Fish

Contrary to its name, the koi betta is not a hybrid of a betta fish and a koi carp. This fish gets its name from how its coloring makes it appear to be part koi. The marbling is very similar looking to that of koi carp. However, koi bettas are 100% betta, also called siamese fighting fish.

The unique coloring of koi betta fish is due to breeding various versions of marble betta. The marbling is caused by a "jumping gene," which can make the coloration unreliable.

This coloration variety was first discovered in the Indiana State Prison in the 1970s by an inmate named Orville Gulley. Gulley bred bettas as part of his rehabilitation program and stumbled across the marbling gene while trying to create a black butterfly betta. These first marble bettas were all black and white, the orange and red coloring not being added until later.

The koi betta colors are more distinct than regular marbled bettas. They can be white with some combination of marbling in black, red, orange, and yellow splotches.

Koi betta fish are short-finned rather than long-finned and grow to be about 3 inches long. Male bettas have wider, longer, and bulkier ventral fins.

Koi bettas can be expected to live 2-5 years.

Koi bettas should be kept in a tank that is at least three gallons. The rule is one gallon of water per inch of fish, so if you house your betta with more fish, you will need a larger tank.

Koi bettas can be kept well alone or in tanks with other peaceful tropical fish. These fish are generally schooling fish, and the tank size should be considered when getting a betta. These tropical fish should have dull and muted colors with short fins so that a betta doesn't ever confuse them as rivals.

Multiple male betta fish should never be tanked together as they will generally fight to the death over territory.

Multiple females may learn to get along, but ideally, they all need to be introduced to their tank at once, and there needs to be plenty of safe spaces for koi bettas to hide from more aggressive bettas. An appropriate hierarchy will be established among female koi bettas, but any unusually aggressive females may need to be removed. 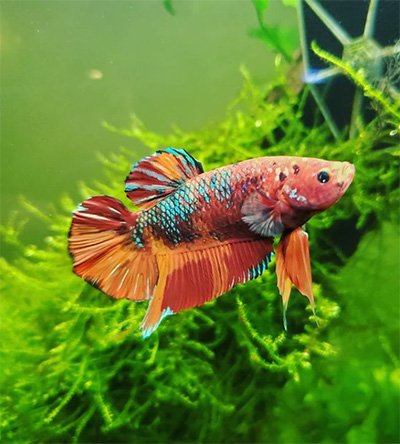 All betta fish are highly territorial and tend to be very aggressive, and the koi betta is no exception. These siamese fighting fish live up to their names. Males should never be housed together because they will often fight to the death. Even pairing a male and a female can result in death if mating chases become aggressive.

Bettas should be added to established tanks to prevent them from fighting with new fish. However, some koi betta fish won't tolerate any tank mates and will only thrive if they are kept solo. Males are more aggressive than females, and male koi bettas are best kept alone if they are to live peacefully.

Bettas do not need light beyond the ambient lighting of a natural day/night cycle. Their tanks should not be kept in direct sunlight to prevent excessive algae growth and extreme water temperatures, but a tank kept in a room with indirect light is sufficient for a koi betta's needs.

They need a natural day/night cycle to be able to rest at night. An artificial light source can be used so long as the bulb does not heat the water and you remember to turn them off for an appropriate daytime cycle.

Fluorescent lights are best for this as they won't overheat the water. If you are not around to turn off the lights for your bettas to have some rest, timers can be programmed to turn lights off after 8-10 hours.

Wild koi betta eats insects and insect larvae. In captivity, they can thrive on pelleted food or fish flakes but will like it better if they can get live or frozen bloodworms, mosquito larvae, brine shrimp, and daphnia. Follow directions on fish food as to the quantity of food to give your koi betta.

As tropical fish, koi bettas will be stressed by unheated tanks or tanks that have no way to remain regulated. The water should be soft water with pH levels between 6.0 and 8.0.

Filters should cause very minimal water movement. Live plants can be added to the tank, so your bettas have places to hide and rest in safety from other fish.

A reliable way to sex your betta is to look for an egg spot on a female. This is a white spot located just past the head, between the two ventral fins. Young female koi bettas may not have developed an egg spot yet, and it can be more difficult to identify their gender.

When the male betta finishes building a bubble nest, it's time to introduce the female. If the female koi betta loves the nest, all is gold, and the mating process can take up to 6 hours. If not, she will reject breeding or become disinterested in the male. If you see any chasing and biting, you can add extra decoration for hiding or separate the two.

Since female and male Koi Betta fish don't get along too well, it would be best for you to keep a close eye on them during the process. Once the deed is done, they should be separated into different tanks.

The best way to ensure your koi betta stays healthy and lives a long life is to keep its tank clean and to provide an appropriate diet. Any sick fish should be quarantined immediately to prevent other fish from getting sick. When you buy koi betta fish, ensure that the fish appears healthy.

Fin rot is a bacterial infection that eats away at your betta's fins, eventually destroying your fish's body and killing it. It is treatable if caught in time.

Constipation results from overfeeding your koi betta and can be treated by reducing or stopping feeding until your fish can pass feces again. Sometimes feeding peas to your betta can help reduce constipation as the fiber can keep the digestive tract moving more smoothly.

Ich is a parasitic infection that encysts itself onto the betta's body and eventually kills its host over time if left untreated. They appear like tiny cotton balls on your betta's body, and Ich can only be treated in the free-floating stage.

Some bettas develop swimming issues that mess with the betta's ability to balance in the water. Symptoms of swimming troubles include bettas floating on their sides or upside down and struggling to swim up or down in the tank. Swimming trouble can result from either physical injury to the fish or bacterial infection.

Galaxy koi betta fish is the most common type of koi betta. They have longer fins and tails and get their name from iridescent scaling and galaxy-like coloration and pattern. Instead of just white, black and red, you will find blue, green, and turquoise.

Koi plakat betta fish have shorter fins and tails than the other Betta fish varieties. With their more rounded tails, they look less frilly than other varieties.

Everything You Need To Know About Pomsky (Pomeranian Husky Mix)

Everything You Need To Know About Whoodle Breed

Can Dogs Eat Pears? All You Need To Know

11 Colorful Fish Species To Add To Your Freshwater Aquarium