The Dwarf Gourami (Trichogaster lalius) is a stunningly bright and vibrant freshwater fish that adds a shock and pop of color to any aquarium. In addition to being incredibly beautiful, Dwarf Gouramis are also incredibly easy to keep and make a good choice for amateur or new fish owners. These hearty fish are popular and come in a lot of possible color variations. Dwarf Gouramis are peaceful fish and can get along well with other similarly sized tank mates, making them a gorgeous and easy addition to any freshwater aquarium.

Thinking of adding Dwarf Gouramis to your tank? Here is everything you need to know about caring for Dwarf Gourami.

Name and Origin of Dwarf Gouramis

The Dwarf Gourami (scientifically known as the Trichogaster lalius) is a small freshwater fish native to the thickly vegetated waters of India, West Bengal, Assam, and Bangladesh. While they are a popular pet or collection of aquarium fish for many in the US, they are actually a common food source in the markets in northern India.

Many fish from the Gourami family are relatively small, and Dwarf Gourami is one exception. Dwarf gouramis grow to be between 2 and 4 inches long and come in a variety of bright colorations.

Most variations are some mix or combination of blues and reds. There is variation in brightness and which color is dominant, and some species even sport gold or green sheens.

Dwarf Gouramis are a generally healthy species with a life expectancy of about four years.

Dwarf Gouramis need a minimum tank size of at least 5 gallons for a single Dwarf Gourami. Three Gouramis can be kept in up to 10 gallons, with an additional five gallons for every Dwarf Gouramis added afterward. They can be housed in tanks with other non-aggressive freshwater fish.

Plainly colored fish are best since any brightly colored fish may pose a threat to any male dwarf gourami. Tank mates should be calm and not overly active species since these can stress out shy Dwarf Gouramis. A community tank works well if you can get a variety of top and bottom fish species that are all peaceful and calm.

Your Dwarf Gourami tank should have a lot of fixed and floating plants, though there should be plenty of water surface area clear so that the Dwarf Gouramis can still have access to breathe.

To keep your fish healthy, tank water should be replaced at 25-30% capacity once a week to ensure disease and chemical imbalance do not occur. 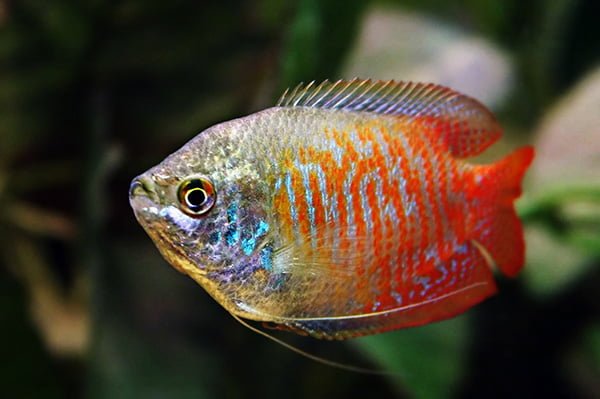 Some of the best mates include:

Dwarf Gouramis are peaceful fish that can be a bit shy and may take a few days to adjust to their new environments. Males are not generally aggressive though they may be threatened by other male Gouramis or other brightly-colored tank mates that they may perceive as rivals.

They can be skittish fish and need to be placed in tanks that are in quiet environments, away from loud or startling noises. They also need tank mates that are not overly active.

As labyrinth fish, Dwarf Gouramis are mid-to-top dwellers, so they have quick and easy access to the water's surface and air. They will spend most of their time swimming near the top of the tanks and hiding among floating vegetation.

The Dwarf Gourami species is an omnivore that eats a diet of insects, larvae, and algae in the wild. In captivity, they can thrive on an appropriate fish flake diet. They can also benefit from freeze-dried foods, frozen foods, and vegetable tablets. Mealworms can be fed periodically to supplement a complete diet as well.

One consideration to consider when you feed your Dwarf Gourami is that whatever pelleted or flaked food you use needs to be able to float long enough for these top dwellers to find and eat them since they will miss the food that sinks too fast. They should be fed an amount and with a frequency based on the instructions indicated on their flaked food or otherwise recommended. 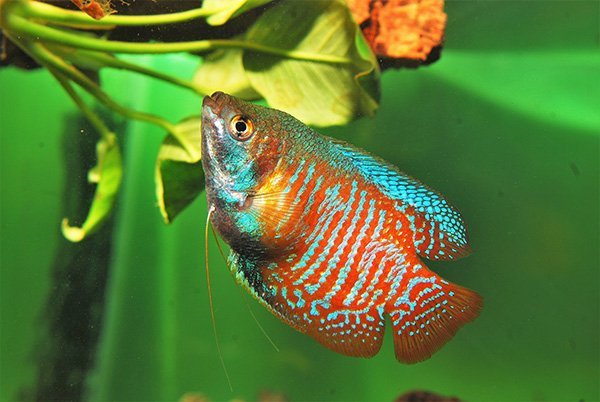 Dwarf Gouramis are hearty and adaptable fish who, in the wild, thrive in waters that are subject to frequent and rapid changes in temperature and light. As such, it is relatively easy to maintain the appropriate water conditions for this fish to thrive. They prefer water that has a pH level between 6.0 and 7.5.

Water temperatures should stay between 72-82ºF and slow water flow. Because they breathe surface air, the air and water temperatures must be similar. This is generally not an issue since most homes stay within an acceptable temperature range. Still, if you live in a colder climate, you may want to consider getting a tank lid and light, which can regulate the air temperature at the tank's surface.

Breeding dwarf gouramis is fairly easy, but it does require some work. First, it is essential to ensure their basic needs are met. This includes dwarf gouramis getting enough food and tank space and having the ideal environment for breeding.

Next, you must determine whether the breeding will happen in a separate tank. If there are tank mates, it can disrupt the breeding process. Therefore, it is recommended that you use a separate breeding tank. However, if you decide to keep it in the same tank with other mates, ensure not to disturb the fish and that there are no aggressive tank mates.

Once the eggs are secure, they will spawn again. If more than one female is in the breeding tank, the male will spawn them all. Depending on the number of females a single male is able to spawn, a two to four-hour period can produce anywhere between 300-800 eggs.

Once the spawning is done, remove the female from the tank until hatching occurs. The male will take sole responsibility for protecting and defending the eggs.

Between 12 to 24 hours, the fry will hatch and continue to develop within the bubble nest. When first hatched, they should be fed infusoria, brine shrimp, freeze-dried tabled, and finely ground flakes later on. Within three days or so, they can move freely on their own.

There are many branches of Dwarf Gourami. Here are the most popular six types:

Like Blue Dwarf Gourami, Powder Blue Dwarf Gourami is known for its bright and cast blue coloring. Very similar to its counterparts, but this type often has brown stripes or dark coloring that runs through its body. 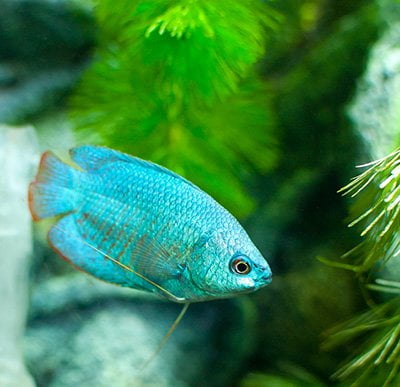 Flame Dwarf Gourami is favorite by many because of their color mutation. They have very bright orange and red colors that transition very cleanly on their fin, which looks like an intense flame. For this reason, there has been a lot of interest in breeding them. 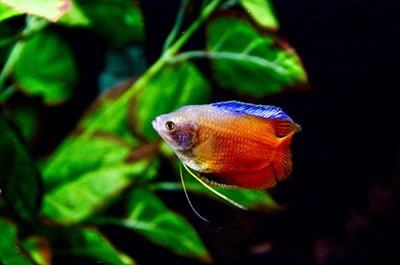 Honey Dwarf Gourami is the most subtle coloring variation. They come in yellow-orange bodies with a mixed hue of reds and colorless dorsal and caudal.

On very rare occasions, you may see dark spots or patches on honey gourami noggin. 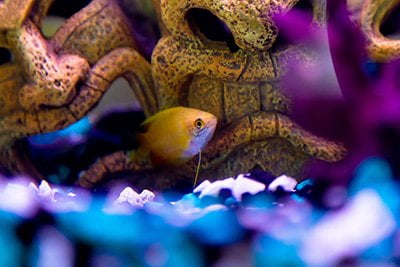 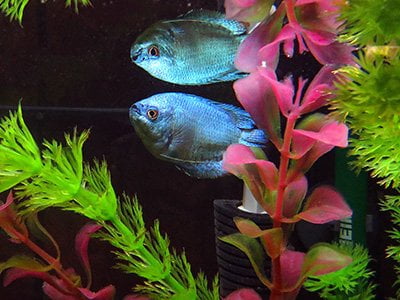 Blue Dwarf Gourami is bright and radiates blue with a tint of red and brown in line along the fins' side. What makes them different and stand out is their crisp blue color that melts into their scale and almost makes their body glow when hit by daylight. 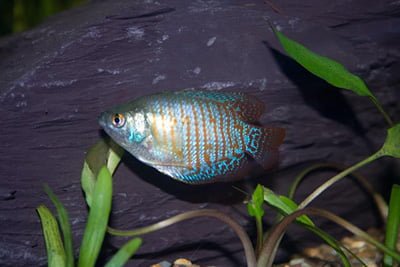 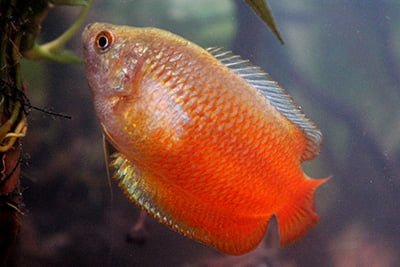 While Dwarf Gouramis are generally quite hearty and healthy fish, the species is prone to at least two specific conditions. Catching these conditions early or acting preventively is crucial to your fish's life since Dwarf Gouramis don't have a great chance at survival if they contract these diseases.

This viral infection leads to the degradation and even total loss of a gourami's fins. There are no supplement cures, though chemicals may help some. The best way to prevent DGD is to monitor water conditions and to regularly change and replace at least 25% of the tank's water weekly.

DGIV, or Iridovirus in Dwarf Gourami

Dwarf Gourami Iridovirus is a severe infectious disease that usually leads to death. There are no known treatments as of yet. The best way to prevent DGIV is to ensure your fish has a strong immune system by keeping their water clean and balanced and ensuring your dwarf gourami has a good and complete diet.