Can Cats Eat Chocolate? All You Need To Know

Cats are curious critters, and although they tend to be picky eaters, they sometimes sneak a bite of human food. Chocolate is a very popular human food and is found in many different forms in a typical kitchen - from chocolate bars to dry cocoa powder to baking chocolates. Pet owners may wonder - is it safe for a cat to eat chocolate? Will it make your cat ill if they do? What happens if your cat ate chocolate? Below, we'll tell you everything you need to know about if cats can eat chocolate.

No, cats cannot eat chocolate. Chocolate is highly toxic to cats and can even lead to death. Many pet owners know chocolate is toxic to dogs, the same is true for cats.

The main ingredients that make chocolate bad for cats aren't just sugar, fat, or xylitol - although those should absolutely be avoided as well. The issue is that chocolate contains caffeine and theobromine, and these two methylxanthines make chocolate toxic to cats.

If you want to give your feline friends some treats, stick to cat treats and cat food designed for cats.

Many pet owners like to present "healthy human food" to their pets as healthy treats, even if they should avoid it. Many human foods are safe for cats to eat, although they should only be given in moderation. However, chocolate is NEVER safe for a cat to eat. Humans may benefit from eating chocolate occasionally, particularly dark chocolate - but with cats, the darker the chocolate, the more deadly the threat of chocolate poisoning. When it comes to cats, it's best to approach chocolate as having no health benefits. 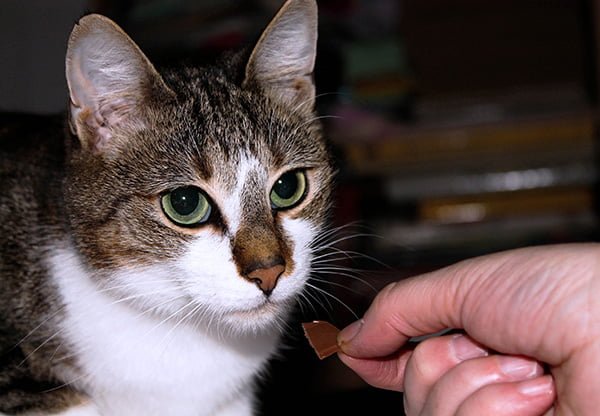 The Downside Of Cats Eating Chocolate

The dangers of a cat eating chocolate are significant. Let's start with the general nutrition profile of chocolate that makes it an unhealthy choice for cats and then discuss chocolate poisoning.

Chocolate is very high in both sugar and fat. Cats are obligate carnivores, and their digestive tract is incapable of processing sugar, particularly in large amounts. If a cat eats too much sugar and fat, it will likely react with vomiting and diarrhea in the short term and struggle with feline diabetes and obesity as time progresses.

To reduce the sugar in chocolate, many chocolate makers use sugar alcohols, such as xylitol. Xylitol is particularly dangerous to dogs and is also dangerous to cats (although to a lesser degree). It dramatically reduces your cat's blood sugar levels and leads to liver disease.

Cats, however, take considerably longer to break down theobromine, and it sits in a cat's stomach for longer, so these byproducts build up in their body.

Symptoms of chocolate poisoning typically occur within six hours of eating chocolate and can last multiple days on end. These symptoms include:

What To Do If Your Cat Ate Chocolate?

If you suspect your cat had chocolate ingestion, you must immediately call the pet poison helpline, your local vet, or an animal hospital. 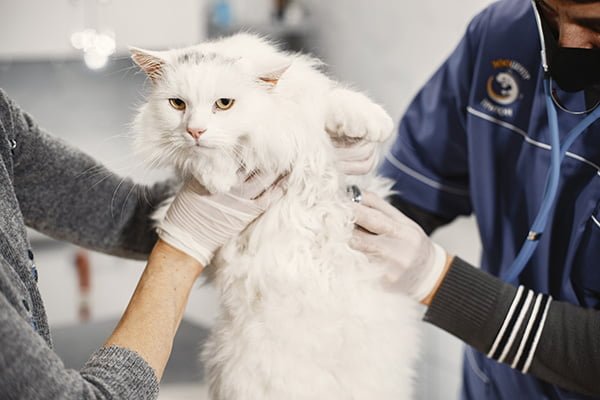 It does not take much chocolate to wreck your pet's system and sometimes even death. Depending on your cat's size and the type of chocolate eaten, chocolate toxicity can quickly lead to death.

Darker chocolates have a higher concentration of caffeine and theobromine, so it does not take much-unsweetened baking chocolate or dark chocolate bars to cause issues. This is particularly concerning if your cat is small in size. For example, an 8-pound cat that eats only a half ounce of dark chocolate will likely experience severe seizures, and eating over half an ounce will result in death.

How Does A Vet Treat Chocolate Poisoning In Cats?

Chocolate toxicity in cats is treated the same way as food poisoning. The vet will try to get as much chocolate out of your pet's stomach as possible by inducing vomiting. It's quite difficult to make a cat vomit, and vets have particular medicines to help. Do not attempt to induce vomiting yourself at home.

If inducing vomiting is unsuccessful, the vet will provide your cat with activated charcoal to bind the toxins that are building up and get them moving through the digestive system. Likely, your pet will be hospitalized and given medications specific to their symptoms (such as medicines to address seizures or heart issues).

No, cats should not eat white chocolate, and all types of chocolate can lead to chocolate poisoning in cats.

Darker chocolates (such as baking chocolate and dark chocolate) are the most dangerous, but white chocolate still contains caffeine and theobromine. These compounds are less concentrated in white chocolate, but because a cat's body is so tiny, it can still be enough to cause poisoning.

In a sense, yes. These chocolate-flavored treats are unlikely to kill your cat, but they are still not good for them and may still make them ill for a few hours. For example, your feline friend isn't likely to show signs of chocolate toxicity from licking the remnants of your ice cream bowl. The chocolate used to flavor these foods is mild and diluted.

However, there is still the concern of sugar and fat in these foods. Additionally, contrary to popular belief, most cats are lactose intolerant and will struggle to digest the dairy content of these foods! If your pet sneaks a lick, don't fret - but don't let it become a regular occurrence.

Why is My Cat Growling?

Cat Grass: What it is and Why You Need to Grow It